What a wonderful time we all enjoyed!  The fellowship was just so amazing!

Last Monday, April 11, 2016, the Historical Marker was officially installed that celebrates the importance of the DeWitty African-American Settlement in a ceremony attended by close to 200 people. DeWitty was the longest lasting African-American, most successful rural settlement in all of, Nebraska. 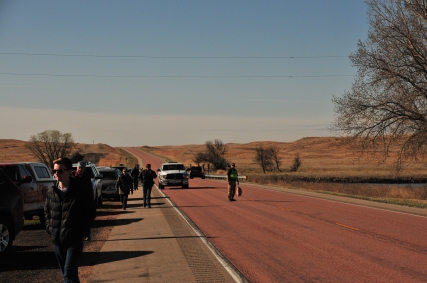 Parked cars lined the side of the highway. Elementary and college students stood with bright eyes filled with interest and wonder. Many traveled from the various Ranches of the surrounding areas including Brownlee, Seneca, and Thedford. Valentine residents also came to learn, share and enjoy the greatness of the occasion.  This occasion was a culmination of a lot of research, phone calls, fundraising and reaching out to the families of the homesteaders and the Sand Hill communities.

The great Ladies of Brownlee prepared a scrumptious midday meal to be enjoyed after the ceremony in the Brownlee Community Center.  Sonny Hanna spearheaded a tour of the Sand Hills taking many of the descendants to the land their ancestors once made their homes and many were still interned there. 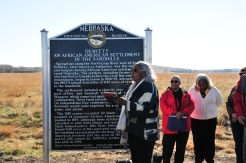 Stew Magnuson, author of Hwy 83, “The Last American Highway”, was the master of ceremony and spearheaded The Descendants of DeWitty Team (Catherine Meehan Blount, Joyceann Gray, and Marcia Thompkins) in the making of this dream come to fruition. The great folks at the Cherry County Historical Society and the Nebraska State Historical Society quickly approved the application for the marker. And so it began, raising the money, buying plane tickets, gathering up old photographs as the excitement increased daily until 17 descendants came from all over the country to reconnect with a place that feels like home! They came representing the homesteaders who many traveled over 1700 miles from Canada and more from Kansas, Missouri, Tennessee, and Virginia to settle in the Sand Hills taking advantage of the Homesteader Act of 1862 and the amended Kinkaiders Act of 1904.

What is so important about this community is the bond between African American homesteaders of DeWitty and their white counterparts in Brownlee. The two communities were very isolated back then and despite differences of heritage and beginnings, they enjoyed a civil and caring relationship that continues up to this day. “Something the rest of America should learn from” stated local resident Shelley Christiansen. Ron Lee also voiced his opinion: “As far as race relations…I will say this..there was not one single person there at that dedication ceremony who was anything different than anyone else. We were just all people celebrating a time in the past where everyone worked together, And, though we’re not neighbors now, land-wise or ownership of the land-wise, we’re still neighbors. Lyn & Bruce Messersmith, Bree & Martin DeNaeyer, Byron & Mary Eatinger,and Ann Manning-Warren to just name a few of who open wide the doors of hospitality.

In the audience were some students that were taught by Goldie Walker Hayes,

a renown teacher throughout the area. She is our maternal grandmother. They expressed their fond memories and shared so many pleasing stories of her grace, beauty,  teaching ability and her kindness. This was so heartfelt and enriching for us who lost her while we were just small children.

Catherine, the granddaughter of Hester and Charles Meehan, spoke of the homesteaders struggles and delights and recited a poem her Dad wrote at age 17, speaking of an old footbridge across the North Loop River.

Yours truly, granddaughter of Roy and Goldie Hayes reminded the crowd: “Although the town was reclaimed by the land the legacy of the homesteaders carries on for they were a success!  This town was not a failure. It wasn’t an experiment; it didn’t wither away because people couldn’t handle the weather – it was a testament to their vision. Which is to set roots down in a foundation for educating their children and giving them a chance at the American dream.”

We found our great grandfather, one of the original homesteaders 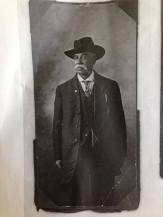 Charlotte Woodson (Granddaughter of Charlotte Riley Walker) with her daughter, Marcia Thompkins granddaughter of Boss Woodson, Rancher and Fernnella Walker Woodson, also a teacher in the county districts expressed her joy: “It WAS an awesome day!      We, the descendants, made great connections, saw pictures we hadn’t seen before, heard more stories from the warm and welcoming people of the community that we hadn’t heard before, toured the land, found our ancestors resting places… I could go on and on! My life has been enriched beyond expectation, and I am forever positively changed!” 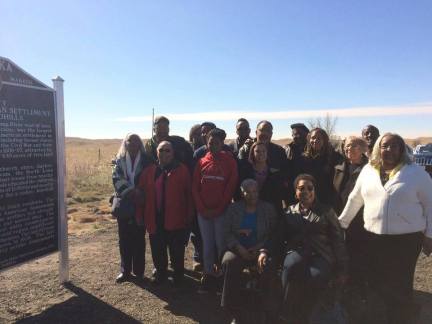 And so we  met back up at the Brownlee Community Center and ate a delicious meal and chatted and shared while Ann Manning-Warren gave us a trip down memory lane! 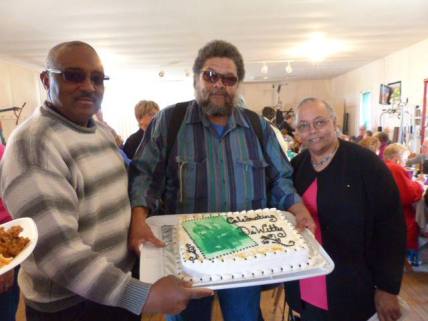 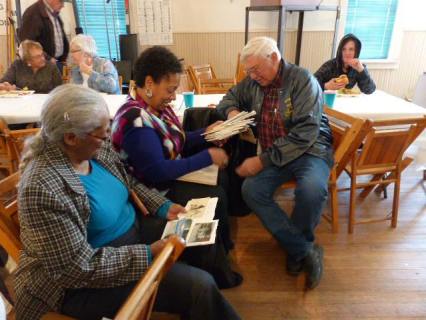 Words from Lyn Messersmith, whose family opened their homes to us: 4/27/2016

The Lay of the Land

Build It and They Will Come

They got it backward, but it worked. A group of  Canadian-born Black families, former slaves, and their descendants came to a desolate and lonely region in the Nebraska Sandhills and built a community they called DeWitty, later renamed Audacious. Six hundred and forty acres seemed like a lot; surely enough to survive on, perhaps even prosper. Prosperity probably wasn’t a concept they dwelt on, so much as survival. That’s how it was in those days, and you didn’t have to be Black to know hard times in the hills. There were neighbors who understood that and welcomed them. The little town of Brownlee, a dozen or so miles downriver, had amenities that served the newcomers until they established businesses of their own, and interactions continued in the form of competitions at rodeos, baseball games and Independence Day celebrations. Brownlee had a community hall, and DeWitty had music makers, so there were dances too.

DeWitty residents were strong for education, which eventually contributed to the demise of the community. Young people went away to college, became doctors, teachers, ministers, and writers and the elders finally drifted away too, but memories of those years lingered around Brownlee and became the legend as I was growing up nearby. My dad and his peers spoke names like Speese, Riley, Turner, Hayes, and Woodson, with admiration and respect.

Stew Magnuson, an author with Sandhills roots, has traveled Highway 83 many times and chronicled the people and places along that route in a series of books. He became fascinated by stories about DeWitty, and recently spearheaded a project to raise funds for a historical marker about it.

On April 11, 2016, nearly two hundred people gathered at the marker for a dedication. Descendants of DeWitty came from both coasts and everywhere in between, and my family was privileged to host several of them. Sandhillers traveled more than a hundred miles to honor our common roots, and the ladies of Brownlee and surrounding communities put on a “Y’all come” feed in that old community hall. The rancher who owns much of the ground where DeWitty stood organized a tour for those who cared to see where their ancestors had settled, and others uncovered buried grave markers in the Brownlee Cemetery for family members to photograph.

As our guests departed for various destinations, they said the weekend had given them closure, and they felt like they had, in some sense, come home. I felt closer to my own family and more proud than ever of my heritage and neighbors.

Many people snapped pictures during that celebration, but I carry mine in my head; of women carrying more chairs to the community hall to accommodate overflow crowds, of a man with a shovel uncovering gravestones and a rancher’s plane sitting in a meadow near the marker. Of people walking half a mile back to their cars after the ceremony because of limited parking at the highway site, and children from a nearby school eating sack lunches brought along on the field trip.

DeWitty is gone, and Brownlee nearly so, but the spirit of neighborliness is not. There are memories of moments less proud in the minds of descendants on both sides, but healing is possible, and the marker celebration is proof of that.

A group of locals leaned on parked vehicles outside the Brownlee community hall and visited while waiting for the room to go in and eat. A thought came to me as we stood there, and as we drove away. It lingers now, as I look back on the event.

“If these walls could talk…”

Is it fate or is it destiny or maybe a coincidence. Better yet, could it be our Ancestors have led us back to where our roots began to grow in this country?

Please read and make up your own mind!!

My research has taken me first to Liberia, Canada, then back to Charles Town West Virginia.   I have uncovered the following information that draws me back to St. Philips in Brooklyn NY:

Which is still an active church to this day.

Black History Books on my shelf

A North-side View of Slavery The Refugee – Benjamin Drew

Downwind from the smoke – Lyn Messersmith

From the Memoirs of Lora “A time Gone By” – Lynetta Jordan

Incidents of the life of a slave girl – Harriet Jacobs

Sketches of Ancient History of the six Nations – David Cusick

The Blacks in Canada A History – Robin W. Winks

The Faces of my people – Monique Crippen

Up from Slavery – Booker T. Washington

When I was a slave – Norman R. Yetman