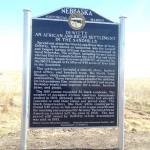 A dedication ceremony for a new Nebraska State Historical Marker in Cherry County commemorating DeWitty- Audacious, the state’s longest and most successful African-American rural settlement in the state of Nebraska at the site of the marker, near the Brownlee turnoff road on U.S. Highway 83.

DeWitty is now officially in the historical records of Nebraska!

A small team of descendants, family, and friends raised $5100 for the historical marker in remembrances of the homesteaders of DeWitty-Audacious, Nebraska. The largest African American Settlement established in the Sandhills of Nebraska in the late 1800’s. Contrary to various accountings for the reason of the demise of this town, DeWitty renamed Audacious centered their energy, vision and struggles to achieve the American dream and the audacity to think they could. They achieved their mission and this is a fitting memorial for all their struggles.
On behalf of the descendants, we wish to recognize Stew Magnuson, author of ‘The Last American Highway’ who was the backbone of this project and a major contributor.  Also, The Nebraska State Historical Society for approving the Marker and The Cherry County Historical Society, especially Joyce Muirhead, who helped set up the fundraising bank account. We were able to accomplish our goal so quickly because of the support from the Bulletin and also the North Platte Telegraph, Stapleton Enterprise, Lincoln Journal Star and radio station KVSH in Valentine who assisted in getting the word out and about Nebraska.   The rest of the team who worked hard to get the word out are Homesteaders descendants: Catherine Meehan Blount, Marcia Thompkins & Joyceann Gray, both descendants of the well-known Woodson & Walker families.

Valentine Midland News editor Laura Vroman ensured our words were heard by printing my articles week after week that offered a more balanced view and history of the rest of the homesteaders. Expounding on the people who worked so hard to give their children a good start in life, the people who shared their skills and talents with others to make a hard life worthwhile. Lyn Messersmith supported my writing campaign with precious memories of the lives of the homesteaders.

With great appreciation, we thank everyone for sharing this important day as the DeWitty-Audacious Historical Marker is installed.
I hope to see you all at the installation Ceremony!