← Neighbors that were the Backbone of the Community
The DeWitty – Audacious Historical Marker soon to be a reality! →

A few days ago, I was on my back porch, and I noticed a lovely butterfly landing on one of the plants. Wow, I wonder if she’ll stay long enough for me to go get my camera?? I dashed into the house, and, of course, the camera wasn’t ready. I had to stop and put the SD card back in. Feeling a bit deflated because I was taking so long, I just knew that the beautiful butterfly would be long gone. But I headed back out to where I saw it and low and behold she was still there!! As I snapped picture after picture I talked gently to her. 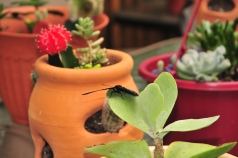 Black and beautiful as can be!

She was just fluttering from plant to plant, then holding still at times and posing for me. I was so excited for I had heard that when butterflies come to you they are in fact your ancestors coming to say hello with a meaning we have to find. Then later that day I went out to get the mail and up from the small group of flowers at the base of the mailbox stand, came two pure white butterflies. They both flew all around me as I walked back up towards the house. I changed my mind and veered off the driveway towards my small vegetable garden to see what was growing. The White butterflies continued to fly around in front of me. I saw there were string beans and a large green tomato that I wanted to harvest, so I headed back towards the house to get a bowl. Those butterflies followed me right up to the front door. Of course (as usual), as I entered the houseI got distracted, I changed shoes and went into my office and sat down at the computer. On top of papers directly under the computer screen; was a form from the Oklahoma Historical Society Research Center. My intention was to fill it out and request a copy of any records available for Polly Johnson, (paternal our great-grandmother). As I reached for a pen, I picked up the phone instead and called the number listed on the form.

I spent almost an hour on the phone with a lovely young lady Katie, who guided my search through various links and what we found…well I just had to take a moment and breath….I didn’t realize until then that I had been holding my breath and gritting my teeth so hard my jaw began to ache. Finally, after getting my breathing under control, I said a prayer of thanks, both to God and to the Butterflies!

These two images are Polly Johnson’s enrollment card as a Creek Freedmen qualifying her for payment of 40 acres we found.  Sadly, though it states that Polly was not mentally well enough to speak for herself. Her cousin Sally Roberts gave witness on her behalf.  The back of her card (to the right) list Polly’s father; “Thursday” listed as a Seminole Freedmen, and her mother Elsie Doyle a full blood Creek. Other records support her mother’s bloodline.

Now I believe I understand why I couldn’t find our names on the rolls. Polly born 1845, was registered on the 1865 Dunn rolls before her first child was born, by the time the Dawes rolls were put in place (1906-1907) Polly had seen such hardship we hesitate to imagine. Her husband had died,  left her penniless with five children, then her brother moved in as a widow, invalid and with two young daughters. As 1900 rolled in she was still struggling to make ends meet. Living with her extended family in a boarding house and washing clothes for 10-12 hours each day, seven days a week for so little pay. By 1903, Polly was in poor health, just plain worn out and with the help of Sally Roberts her cousin and other family members they moved her to Oklahoma nearer to her family. Her children were all grown and gone on to find their way in life, but she had her daughter Ida and many other family members to count on. Her oldest was John Grant Pegg, married to the former Mary Charlotte Page of Kansas, father, and a respected Republican in Omaha employed by the Mayor as the Weights and Measures Inspector. Her daughters Ida and Maggie both married and with families of their own. Not sure what happened to Robert but Bayless her second son by this time was up north with younger brother Charles homesteading on their cattle ranch in the Sandhills of Nebraska. They eventually gave up the harsh life and Charles first moved to Illinois then onto Oakland, CA and Bayless moved to Chicago, IL.

Listed as a Freedmen was a mixed bag for many, it must have felt like being the ball in a ping-pong tournament First the mixed blood was accepted, and then the Five Tribes declared them noncitizens. This argument has continued to present day. Can the descendants of the mix blood and slaves of the Indians be counted as citizens of the Indian Nation, can they have the rights and privileges, voting and such?

So now what we do know is Polly Johnson’s father was Thursday and her mother Elsie Doyle and her cousin is Sally Roberts with a younger cousin Sid Kernel!     Not bad for a phone call on a hot afternoon!

There is much more to this story, please follow me and get my updates.

Mvto (Thank you) for reading my Latest News!

Joyceann Gray Retired US Army, Author of " Yes We Remember" and "Our DeWitty and Now We Speak" Independent Family Historian and Genealogist has a combined 40 years of service in the areas of communications, Real Estate Appraisal, and marketing. Her focus of combined colligates studies in Communications, Business Management, with a Masters in Psychology. Gray's historical and genealogical research is on her family movements from Virginia to Canada and Liberia. From Virginia, Kentucky, Tennessee, and Kansas to Nebraska and from Canada to Nebraska. All during the 18th through the 20th centuries. Her goal is to bring alive the stories of achievements and legacies that her ancestors left for present and future generations. She is an on going contributor to www.blackpast.org. and also a founding member of the Charles Town Researchers. Her personal quote is “You cannot know where you are going until you know who you are, you cannot know who you are until you know who came before… It is only then you will find your Direction and Reason for being.” J. Gray Love of God Family and life! Married to my best friend, I enjoy traveling, researching our families histories and who they were as individuals, also I enjoy cooking and making my family happy.
View all posts by MsLadyJae »

← Neighbors that were the Backbone of the Community
The DeWitty – Audacious Historical Marker soon to be a reality! →