← What A Moving And Encouraging Afternoon!
Nebraska Historical Marker In Rememberance Of Our Ancestors Dreams and Hopes →

A Town of New Beginnings and Lasting Legacies

Their point was not to establish a generational farming community but to establish a base for their children and future generations as well as excel in whatever field they chose.  And they had the audacity to think they could.

We remember the Emanuel family today, warm, loving and hard working. From Gary County came the Emanuels to Canada, and then migrating back to the states and Nebraska.   Joshua Emanuel the second son of Samuel and Sarah was a dynamic intelligent individual who, along with John Kersey, and John Travis, designed and built the Bethel Methodist Church in Buxton, Canada. In coming to Nebraska, he brought experience and skill with a good business head. The various buildings would later demonstrate this skill as he designed and help to build in Dawson and again in DeWitty-Audacious. He married Lucinda Travis and they had seven children together. After her passing, l he married Ida Delienay and they had two children together.  Sadly, Joshua would pass at the young age of 52 and would not live to see how fine his children and future generations turned out. One particular descendant is James Andrew Emanuel born on June 15, 1921, in Alliance, Neb. His father, Alfred, died when he was young. His mother, Cora, was a schoolteacher and a driving force in his life. James became a renown poet, educator, and critic who published more than a dozen volumes of his poetry, much of it after his frustration with racism in the United States which helped motivate him to move to France. James received his higher education at Howard University in 1950 and received his master’s from Northwestern in 1953. He earned his doctorate in English and comparative literature from Columbia while he was teaching at City College. 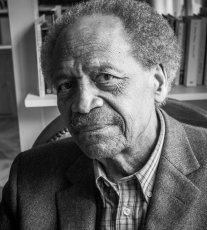 became the epitome of what each of the homesteaders of DeWitty-Audacious wanted for their children. You can find James A Emanuel papers at the Library of Congress

Thanks to all who have sent checks to help in celebrating the homesteaders of DeWitty-Audacious and their legacy by donating to our Historical Marker fund: the most successful rural African-American community in the state.   If you haven’t done so, you can send a contribution to:     Security First Bank

The family of Joshua and Mary Emanuel

Joyceann Gray Retired US Army, Author of " Yes We Remember" and "Our DeWitty and Now We Speak" Independent Family Historian and Genealogist has a combined 40 years of service in the areas of communications, Real Estate Appraisal, and marketing. Her focus of combined colligates studies in Communications, Business Management, with a Masters in Psychology. Gray's historical and genealogical research is on her family movements from Virginia to Canada and Liberia. From Virginia, Kentucky, Tennessee, and Kansas to Nebraska and from Canada to Nebraska. All during the 18th through the 20th centuries. Her goal is to bring alive the stories of achievements and legacies that her ancestors left for present and future generations. She is an on going contributor to www.blackpast.org. and also a founding member of the Charles Town Researchers. Her personal quote is “You cannot know where you are going until you know who you are, you cannot know who you are until you know who came before… It is only then you will find your Direction and Reason for being.” J. Gray Love of God Family and life! Married to my best friend, I enjoy traveling, researching our families histories and who they were as individuals, also I enjoy cooking and making my family happy.
View all posts by MsLadyJae »

← What A Moving And Encouraging Afternoon!
Nebraska Historical Marker In Rememberance Of Our Ancestors Dreams and Hopes →